Happy Thanksgiving Week! On a week when we remember the abundance of God's creation … despite the blaring messages from retailers and politicians: YOU NEED MORE … YOU DON'T HAVE ENOUGH … THERE'S NOT ENOUGH SPACE FOR THEM …
Photo Credit: Kim Kyung-Hoon/ReutersWhat happens when we govern by scarcity and fear
I wanted to share my latest for Living Lutheran, a piece about a unique ministry on California's Central Coast that combines sustainable agriculture, living wages for farmworkers, and the abundance of grace for all. Check it out here or read it at the Living Lutheran site — or in the November print edition of Living Lutheran. 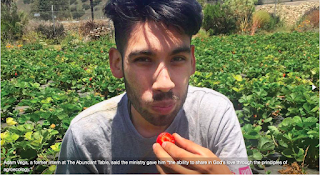 Photo credit: Adam Vega, former Abundant Table intern, and Living Lutheran
Most pastors and leaders pray that people involved in their ministry will be spiritually fed. But The Abundant Table ministry in Ventura County, Calif., has taken that goal a step further. Through the ministry, people are fed spiritually and literally. The Abundant Table is a nonprofit corporation, ministry, Farm Church and sustainable organic farm that began as a campus ministry project at California State University Channel Islands (CSUCI) in Camarillo.John Soyster, then pastor of Mount Cross Lutheran Church in Camarillo, and Julie Morris, an Episcopal priest in the Diocese of Los Angeles, came together in 2004 to start a Lutheran and Episcopal campus ministry at CSUCI. A few years later, Morris’ in-laws, who were fourth-generation farmers on the nearby Oxnard Plain, donated use of a ranch house and a few acres of land, and The Abundant Table farm campus ministry was born.In 2009, with support from Trinity (Episcopal) Church Wall Street in New York City and a nearby ranch, an internship program began for students to live at the ranch for up to two years through the Episcopal Service Corps. While campus ministry was initially done traditionally—in a building—Morris and Soyster felt strongly that the local context needed something more innovative to draw in students and community members from a variety of faith backgrounds.While many Americans read Southern California and think beaches, Ventura County and California’s central coast are some of the most verdant and prolific lands for agriculture. But many of the farms use chemicals to clear the land of weeds and pests. There are also concerns about fair treatment of farmworkers, many of whom are undocumented workers from Mexico. By using organic farming practices and modeling equitable treatment of farmers and farmworkers, those involved in The Abundant Table thought it could set an example for the kind of multifaceted ministry Jesus preached about in the New Testament, which is rich with stories about farming, agriculture and feeding people.

“Farm Church … reminded me that the word of God isn’t exclusively in the pages of the Bible or pews of the church but inside and all around us,” Vega said. “The word is alive, and we are living examples.”

Adam Vega, a former CSUCI student whose church growing up was St. John Lutheran in nearby Oxnard, was moved to find solutions to the economic disparities in his home county upon starting college and studying political science. He ended up doing a yearlong internship at The Abundant Table and now serves as a community organizer for Californians for Pesticide Reform.“The Abundant Table’s  residential internship presented me the  opportunity to help nourish those impacted  by our current industrialized farming system—all of us,” Vega said. “It was the  community I had long yearned for, the ability to share in God’s  love through the  principles of  agro-ecology.”The Abundant Table’s ministry has at times felt like the parable of the sower—some years fell on fertile ground, others were difficult.Through it all, worship services have continued. Farm Church, as it’s called, is highly creative and mostly lay-led. Each week of the month is different, using several types of services—Taizé, outdoor, radical discipleship with a local cooperative ministry group, children and family centered, and bilingual.“Farm Church … reminded me that the word of God isn’t exclusively in the pages of the Bible or pews of the church but inside and all around us,” Vega said. “The word is alive, and we are living examples.”A frequent preacher and leader in the bilingual services is Reyna Ortega, a native of Mexico who immigrated to California at 14 as a farmworker. Today she is the production manager on the farm team for The Abundant Table, one of two permanent farmers employed to run the farm, along with one to two contract farmworkers.Ortega’s presence brings a Hispanic background that is shared with many of the CSUCI students, and hearing her story is powerful for them, said Nicole Janelle, an Episcopal priest and executive director of The Abundant Table. Ortega has also been instrumental in creating partnerships with local schools, who serve food grown at The Abundant Table in their cafeterias to students, including her four daughters.“On many farms there is no respect or value for agricultural workers,” Ortega said. “These workers are simply seen as part of a production machine. The workers are understood to be expendable and not deserving of human dignity. At The Abundant Table, we as farmers have the opportunity to see ourselves as workers who are children of God, worthy of respect and fair treatment.”الخبر منشور أولا فى الموقع يتبع الرابط اعلاه